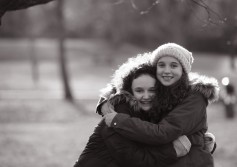 Dear Reader, I am perplexed and befuddled! By trade, I deal with pregnancy and birth and, although by no means do I claim to be an expert, I like to consider myself rather au fait with babies. However, I seem, in the blink of an eye, to have become the parent of three teenagers (well two teenagers; DD’s 1a and 1b -twins of 13 and my 11year old tweenager.) And I have to confess, I’m feeling rather at sea with the whole thing.

Let me explain – my girls are good girls; yes we have the hormonal ups and downs, yes we have the rolling eyes, whenever their father or I say something that is considered ‘lame’; yes there is the constant mantra of how we are so unfair and nobody understands them; but on the whole I’m pretty confident that they are telling me the truth about where they are going and who they are with and that I can trust them.

‘So what’s the problem?’ I hear you ask. Well, the problem is that I am rapidly loosing my super powers – my ability to keep them safe and out of harm’s way, my ability to make them feel better with a kiss and my ability to ‘fix’ things in the way that only a mummy can. I remember thinking when they were babies, how I would give anything for them to move on to the next stage and the next, because then it would be easier and we could get back some semblance of routine. Little did I realise, that the older they got, the more voices there would be and the more influences there would be. That didn’t seem so bad when they were in nursery, or even primary school to a certain extent, because I could see how much they were learning from the different people around them and new experiences. Apart from a couple of incidents (e.g. DD1a smothering her friends hair with Vaseline because she was giving a ‘treatment’ just like she had seen in the hairdressers!) these were on the whole interesting and character building. Even when things were not particularly pleasant, I could always have a word with the teacher or make things better because . . . well, because I told them I could and they believed me.

However when they started secondary school, EVERYTHING changed – I honestly felt as though I was throwing my precious children into the lion’s den and hoping I had given them enough skills thus far to survive! Luckily they made friends and have settled into their place in the social pecking order. However, there is this desperation (you can almost smell it) for everyone to be exactly the same as everyone else. Yes, I know this is not a new phenomenon but the use of social media brings this concept into worrying territory. From lip-synching along to songs on ‘Musical.ly’, girls are now posting pictures of themselves, in various states of undress and various types of pouty poses. It is actually quite horrific how these girls flaunt their newly acquired curves, in their underwear, tight fitting cat suits and low cut tops (Snap Chat filter optional, it would seem.) Even more worrying is that popularity seems to be measured by the amount of likes a picture gets so the accounts are not private, pretty much guaranteeing that a fair amount of the ‘likes’ are not from fellow 14 year old girls!!! They are true victims of the Kardashian Culture that we now find ourselves a part of.

I am pleased to say that the crowd of girls they have become close to, are not like this. Everyone told me that it the crowd they hang out with is so important as far as the choices they make. However, it would seem that even amongst this group there is in-house bickering and my elder two are currently learning that not everyone has the same principles as they do and I am, as we speak, mopping up copious amounts of tears and giving lots of hugs – it doesn’t seem to be helping. DD1b has declared that she can ‘literally feel her heart breaking’, I think mine has a little bit too.

So, the long and the short of it is, I’m stumped. Nothing I say seems to bring any relief from the ferocious insecurity about their body shapes or the crushing disappointment over a friend’s betrayal. My mummy super powers have met their kryptonite! Maybe I need to write them a letter, If I did, this is what it would say:

I am so proud of all of you and who you have become and one of the hardest things for me is watching you go through the ups and downs of growing up and knowing that, even though I desperately want to, I can’t keep you from stumbling occasionally.

Know this though, you already have such incredible strength and, even though it may not always seem like it, doing the right thing is the only thing you should do. Yes, friends may come and go because of it, but it takes far more bravery to stick your head over the parapet, then it does to follow the crowd. Extending that hand of friendship to someone who is feeling sad can make that one person feel 6ft tall, even if it earns you aggravation from other quarters. You are beautiful and your bodies will go through numerous changes over the years and you will always look beautiful because you know that self-worth and the respect of others is a far more powerful currency than ‘likes’ on social media.

Although I find the prospect of you leaving me to go on school trips or travelling around the world, or even to the local shopping centre more painful than you can possibly realise until you have daughters of your own, I promise I will not hold you back. I will always be your sounding board, your back-up, your right hand man. I will always tell you when you’re behaving like a brat, and I will take your phones away if I ever find a cleavage and pout picture on your Instagram accounts!!!!! I will always support your choices and I will rejoice in every single thing you achieve, but also at the things you don’t achieve, because I know how hard you tried. I truly marvel at the three wonderful humans I have managed to create (ok, your father had something to do it with it too!) I realise that my super powers don’t seem to be working as much as they used to, but you don’t need them anyway. To quote something I saw on Facebook (there are times when social media can be a good thing)

“You are enough. You are so enough it is unbelievable how enough you are!”

I hand my superhero status over to you xoxo

What does Dani Diosi, Doula, do (when on call)