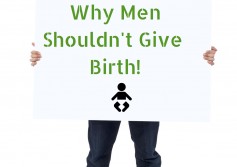 DD1b (older two are twins – she’s the ‘younger’ one) came home from school the other day and reported that her year 7 science teacher – during the topic of sexual reproduction – had compared the pain of giving birth for a woman to being kicked in the testicles for a man.

I then saw this video on a friend’s Facebook feed:

Hilarious right?  Especially the way the men look after the session has finished and the wives high-fiving each other in the back-ground.  However, whilst a small part of me (ok – actually quite a large part) is amused by the removal of the oh-so-cocky grins from their faces, most of me objects to this and the science teacher’s comments because, although a woman feels her contractions, it is not the same type of ‘pain’ as the afore mentioned wiring up to an electric shock machine or the assault on a man’s nether regions.

In my role as a doula and Natal Hypnotherapy practitioner the majority of women and their partners I come across are scared.  Scared of being out of control, scared of the unknown and most of all, scared of the pain of childbirth.  And whilst a science lesson directed at 12 year olds is likely to have a learning objective of putting kids off sex, the very negative view on childbirth is a message that stays with these kids into adult-hood.  Unfortunately, this is then further compounded by videos such as the one you have just watched and just about every other media portrayal of birth you are ever likely to see.

Now, I know there will be some people who read this blog who will be thinking to themselves – “er hello!!! Is she off her rocker? Of course labour is painful and this is exactly what epidurals were invented for” which is absolutely fine –your birth, your choice, I am not trying to convert anyone here.  However, I am trying to encourage you to think about birth in a different way, a less frightening and off-putting way.

Ok, let me start at the beginning – this concept of pain.  ‘Pain’ hurts – right? Yes it does and the reason for that is so that we are notified that there is something wrong and we need to sort it out. Appendicitis is a warning sign that an organ in the body is about to burst and flood our system with deadly poison.  The pain from a broken bone is a warning sign to take pressure of the limb or risk doing even more serious damage.

So what about the ‘pain’ of childbirth? Surely it should be viewed in the same way – there is pain so we should sort it out right?  Wrong! The ‘Pain’ of contractions is very different from that of a burst appendix or a broken bone. The sensations felt during labour are that of a muscle working (just like when we exercise) and working hard.  It’s also a big muscle so it stands to reason that we feel it when it is being used.  This muscle and the sensations we experience from it working have a specific purpose; they tell us where we are during labour (i.e. do we have time to finish shopping at Sainsbury’s or do we need to hunker down and get on with having this baby); they tell us what positions work for us and which ones don’t (there is a reason why lying down makes the whole process much more painful); and, most importantly it tells the brain to produce more of the hormone responsible for producing the contractions (Oxytocin) and powerful, powerful natural pain-killers known as Endorphins.  These hormones make labour much more manageable because they give our bodies everything they need to birth our babies.  However, these hormones, the same ones produced by all mammals, work best in a private, dark, secure environment.  Any situation which interferes with that safety (erm, like being electrocuted, for example!) is going to result in anxiety, stress fear and, wait for it…….. pain!  The adrenalin we produce because of the ‘Fight or Flight’ response is going to produce tension in the muscles which means that everything is going to hurt more.  This, in turn causes more anxiety and even more pain and becomes the most vicious of vicious circles.

I’m not going to lie to you, you feel contractions.  They require all your attention and your focus and at times, they will be described as ‘painful’ however all methods of hypnobirthing including Natal Hypnotherapy enable the mother to work with the contractions rather than suffering from them.  Not only does the hypnosis element help to change the mind-set of mothers and fathers-to-be, giving them more confidence approaching the birth, but it gives them extremely effective and powerful tools to help keep them calm and relaxed during labour, encouraging the body to do what it needs to do and helping them to have a more positive birth experience.  Dare I say it? It can even help to reduce the ‘pain’!!!

I was at a birth recently, in my Doula capacity and the Mama was AMAZING!!!! She breathed, she focussed, she used nothing other than Natal Hypnotherapy for 24 hours straight.  Yes, she felt the contractions but she wasn’t afraid of them and embraced each one as a very positive sign that she was one step closer to meeting her baby.   At the risk of sounding like a cliché, it is what she and women since the beginning of time were made for and therefore beautifully designed to give birth.  Men on the other hand……

What does Dani Diosi, Doula, do (when on call)